This is a button

Power of One
Jade Tillequots 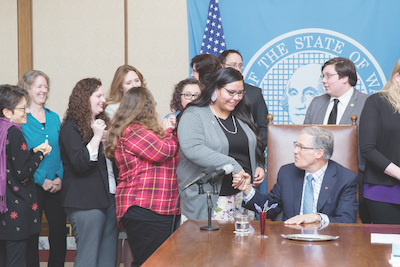 To make change you need to be involved. You need to tell your story, be involved, and share the outcome to make change. For me to tell this story, I must tell you a little about myself. I entered foster care at age 4 and exited at age 18. Since I am Native American, I was placed in the tribal welfare system.

The state welfare system and the tribal welfare system are pretty similar. Generally, youth who are in tribal foster care are placed with a family member. This was true for me as well. I only had two placements my whole time in care.

One of the biggest supports while in care is all the help you receive to get into college. But once you are in college those supports disappear. When you are in state foster care in Washington, you are eligible for the Passport to College Promise Scholarship (Passport) program which provides that continued support. As a youth in tribal foster care, you do not have that support. I didn’t have that support

As a Chapter Leader with The Mockingbird Society, my Yakima Chapter helped advocate to expand the eligibility for the Passport to College Promise Scholarship. I know that in order to make change, you need to be involved. The Yakima Chapter and I wrote up a proposal to include youth who are in tribal care, federal foster care, and the Interstate Compact on the Placement of Children (ICPC). In May, the Yakima Leadership Team and I spoke to the Passport Network and that was the beginning of the conversation to making this idea a law. This panel was very nerve racking because of the audience size, and because we were talking to the people that are a part of “the system.” But it was a great panel and I was able to tell these supportive people who work with foster alumni how to better assist youth in college. The Yakima Chapter then presented this proposal at Mockingbird’s annual Youth Leadership Summit to policy makers and stakeholders. The conversation continued with the support and guidance of those who listened to our proposal.

Eventually, our proposal was included on Mockingbird’s annual advocacy agenda and state policymakers were willing to sponsor a bill to expand eligibility for the Passport program. During the legislative session, I was asked to testify in front of a Senate Committee to share my story again and talk about how having Passport would have been beneficial to me. This was yet another nerve racking experience as it was my first time testifying before the Legislature. But this was also a very pivotal moment in the expansion of Passport. After that, the Mockingbird community came together to use our voice collectively in support of this issue.

Finally, in March 2018, I, along with the other Yakima Chapter leaders, was able to witness Governor Jay Inslee make the work that we advocated for all year become a reality.

With all our hard work I can proudly say that youth in tribal foster care, federal foster care, and ICPC can now get the Passport to College Promise Scholarship once it is implemented. Other advocates helped to expand the program to include youth who are experiencing homelessness. I hope this is the beginning in aiding the tribal welfare system. Being involved allowed me to use my voice and see the process from conception of an idea to watching the actual bill signed into law.

So, I am asking that if you are really passionate about making change that you get involved with that cause and continue to advocate for it. Someday, you might see it come true.